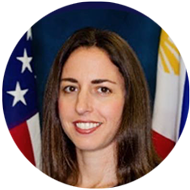 Heather Carlin Fabrikant joined the Foreign Service in 2008, after a career in refugee affairs that took her to West and Central Africa, the Middle East, and Central America.  A native of Washington D.C., she received a B.A. in history from the University of Pennsylvania and an M.A. in international relations from the Graduate Institute of International Studies in Geneva, Switzerland.

Heather speaks Spanish, French, Russian and Kiswahili. During her tenure with the department, Heather has served as Public Affairs Officer in Nouakchott, Mauritania, and Erbil, Iraq.  She was an Assistant Cultural Affairs Officer in Kyiv, Ukraine and in Kenya Heather served as the Embassy’s representative to the Coast, in a hybrid political and public diplomacy role. In an assignment with the Bureau of Population, Refugees, and Migration, Heather deployed to Adana, Turkey, as Senior Humanitarian Advisor working with Syrian refugees. During a tour with the Operations Center, Heather served as a Watch Officer at the Department’s 24/7 crisis management hub.  Heather has earned Superior Honor and Meritorious Honor Awards and was also recognized with an award by the Secretary of State for her work with Syrian refugees. Heather has two children, a daughter, and a son. Heather joined U.S. Embassy Manila in July 2019 as the Information Officer and completed her tour in August 2022. She is currently working as Senior Advisor on refugee issues prior to entering National Defense University for a yearlong master’s degree in 2022-2023.