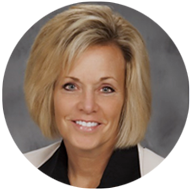 Jenny Greminger joined State Farm® in 1991 as a drafting technician in building design and construction in Bloomington, Illinois. She moved to Ohio, Indiana, Texas, and Arizona where she received several promotions in facilities management, data center management, and underwriting.

She has served on the Board of Directors of the National Diversity Council and a member of the Illinois Partners in Policymaking team focused on advancing rights and opportunities for people with disabilities. Jenny served on the Transition Planning Committee for the local school district, working with teachers, agencies, parents, and other interested parties in assisting teenagers and young adults with disabilities in successfully transitioning from high school to adulthood. In her free time, Jenny enjoys traveling, dabbling in various art projects, and staying active with family and friends.